It’s not uncommon for the implementation of new standard practices in a municipal government to turn into a series of mounting headaches. But the city of Leeuwarden figured out how to avoid the major pitfalls – with the help of the Prosci method.

Introducing a more standardised way of working, that was the undertaking the city of Leeuwarden was facing in 2020. No small feat. Although it actually involved a refresh and reintroduction of this way of working. The city had already made multiple attempts to implement a more standardised system. There had even been talk of a temporary system, but many of the employees just didn’t understand how that system worked.

Jelda Veninga was a member of the project team leading the introduction of this new methodology. As was Albert van Holthoon, the programme manager of the Leeuwarder Digital Agenda. According to him, “Implementing new standard practices hasn’t always gone well in the past. This time it needed to work.” Making the task even more complicated, the city chose to tackle it jointly with two other towns: Noardeast- Fryslân and Waadhoeke.

A light in the dark

Together, the three towns forged the bonds of collaboration though roundtable discussions about change, implementation and onboarding. Along the way, they realised that the Prosci methodology might be able to help them make this mission a reality. So, the project team took part in a Prosci training – led by Erik Steketee, an Advanced Prosci Instructor with The People Side of Change. The goal was to use the Prosci method to help the entire municipal team feel invested in the new way of working, so that they would champion this approach.

“Over the course of the three-day training, Erik led us in a light-hearted way through some fairly heavy topics,” van Holthoon remembers. “It was just before the lockdown began, and thus in person. And what I found really powerful was the simplicity of Erik’s story. It just really energised us.”
This energy spurred the project team members to first hold talks with everyone in the local government. They pieced together the big picture of which departments would be most impacted, and where there was resistance.

“Important,” says Veniga, “because key users want to stay ahead of the game, we need to make sure we’re including them. While Albert was sharing our strategy with the people at the top of the organisation, I turned my attention to the impact it would have on the workfloor, by actively seeking out the points of resistance. Most of the team felt positive about this change, but there were definitely opponents as well. Luckily, we had our story well prepared, about why we were doing this and why now.”

One of the key acronyms in the language of Prosci is ADKAR, whose first two letters stand for Awareness and Desire. In the series of online and in-person ADKAR checks the project team organised with the management team and key users, van Holthoon says it became evident that people had either very positive or very negative feelings about the project. “There was nothing in between – and that was great, because that says something about the people themselves.”

For Jan van der Werf, project leader on the city of Leeuwarden’s people side of change, it was his first time encountering this part of the Prosci process. “I learned from the ADKAR checks that you shouldn’t let a negative score rattle you. It gives you the insight to direct your attention towards the problem areas. This pushed us to reach out and get everyone more involved in the project. I think the advantage was that it opened up more conversations with the team, to help us realise this change. I hadn’t experienced this working in the government sector before. It was wonderful.

Veninga agrees. “We needed to get 1,700 employees through the process. That’s quite a lot. The strength of this method is the follow-up and active feedback. The Prosci methodology allows you to take advantage of an exponential learning curve. In the end, everyone in the organisation scored well on the criteria: ‘I understand why this change is needed and I want to be part of it’.”

There was however a difference in the tempo of adopting change. The key users had already thought about the process changes before they went live, but that was less true of other users across departments. “In hindsight, we should have given them an even bigger wake-up call,” suggests Veninga. “The actual impact on people only became clear later in the process. On the change side, we were ahead in our technical planning.” That led to members of the project team getting lost in the details, also the technical ones.

Van der Werf notes in retrospect: “I think that the supplier of these new standard practices might have found us a bit difficult for this reason.” The new system of practices went live in Leeuwarden in June 2021. Barely a month later, the members of the project team looked back at that launch with satisfaction: “Right from the moment that we went live, we were ready to help with any issues people encountered. We got compliments for that. That was the moment all our earlier investments paid off. All together, we spent a lot of time on this – but when I see the results, it was more than worth it.”

Veninga heartily agrees. Most of all, she is happy that the organisation is now looking to the standard practice principles rather than towards past experiences. “In my experience, that success comes first and foremost from our collaborative approach, using the Prosci methodology. That gives you a common language to use.” Van Holthoorn says that Prosci is a keeper in Leeuwarden. “We’re using it now for all major IT changes, to help people see the forest for the trees. Just as with implementing standard practices, it helps people get the how and why.” The municipality management has also become a fan of Prosci, according to Veninga. “They are just speechless. As they should be: even the biggest opponents in the organisation eventually found that they had nothing left to complain about.”
“The Prosci methodology allows you to take advantage of an exponential learning curve” 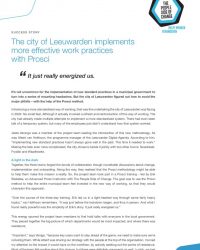 Do you have questions?

The People Side Of Change

Enter your details below and we will call you at a time that suits you.